It was our first walk of the post-holiday/post-snomageddon/new year. I was feeling a bit sick to my stomach but decided to walk anyway.  I thought perhaps that we’d just do a truncated walk; around 5000 steps. A caveat that I need to tell is that we started around 10:45am so we weren’t going to get the “10k by 10a,” either way. But, that’s 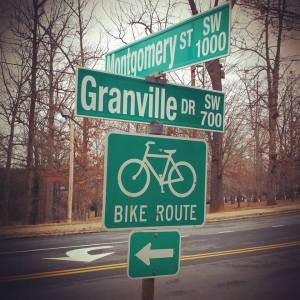 okay. The point is, we weren’t just lying around in bed or lazing around. It was a day to get out and do some moving.

We parked at Diggs-Latham Elementary School, a school that our son, Trey, attended for three years and where Stephanie taught for two years. Diggs-Latham is on Hutton Street, in the neighborhood of West Salem. We walked north on Hutton, admiring several of the homes on the street. We’re looking to relocate and are exploring several neighborhoods that we think would be good for us. Hutton turns east onto Montgomery Street and ends at Granville Drive, right across from Granville Park.

We turned south on Granville and continued on southeast to where it veers off south, but we continued on Walnut Street. We stayed on Walnut southeast until it crosses South Broad Street. We walked south on Broad until we came to the Washington Park leg of the Winston-Salem Greenway system. Now, we didn’t officially walk in the Washington Park neighborhood, but in the actual park itself. We walked past the dog park and crossed Salem Creek on the wide bike/pedestrian bridge to where the Washington Park #1 ball field is and continued south to where it comes out at Marketplace Mall Shopping Center at Peters Creek Parkway. We debated going back the way we came or going up to Peters Creek and walking back down to Link Road and then to Hutton.

We decided to go back the way we came and when we crossed back over the bridge, instead of going back to Broad, we turned northwest past Washington Park fields #s 2-4 and the park drive to Hutton, right across from Diggs-Latham and back to our car.

There’s lots of things to see on this route, at least the early parts. Like I said, the houses on Hutton are cute bungalow styled homes. When you’re on Montgomery and Holland Street, there are five (I think) new homes that are very modern. So modern, in fact, they’re almost futuristic. These were designed by Stitch Design Group in Winston-Salem. The houses don’t fit the West Salem mold but at the same time, brilliantly fit in the community. They look cool to me.

Granville Park, it’s said, has been popular since the 1910s-1920s. The city of Winston-Salem purchased it in 1920, it was around a few years prior to that. It has a lot of deep valleys and a few trails that appear “off the beaten path,” but aren’t really. I’ll admit that I can’t remember seeing anyone in the park area, itself, but I’ll also admit that I’ve only been there on Saturdays or late at night. I know that the tennis courts are lit up a good bit when it’s a bit warmer. Several houses in this area are listed in the book, Winston-Salem’s Architectural History by Heather Fearnback. The one that we actually walked past that was listed is the “Fred Nelo and Ruth Miller-Snyder House” at 704 Walnut Street, which is known, obviously, for its architectural significance. It’s a rather large house, at that.

The dog park in Washington Park is a fairly good size run. Separate for larger and smaller dogs, there were several people in the large dog fence and letting their pooches run free-ish. The city needs more of these. The weird part is, this park isn’t even listed on the city’s website. There’s one at Tanglewood and one at Horizons Park. A personal tidbit about the Washington Park softball fields, I’ve played on each of them. That is until an injury ended my softball career. I was hit in the face by a line-drive hit on #4. I was playing shortstop in a co-ed league when a guy bigger and wider than me hit the ball. It was like a knuckleball, with no movement and it caromed off my glove and cracked me in the cheekbone just below my left eye. If it had hit anywhere else, it would have shattered my face. It

did crack my sinus which still gives me problems today. It lifted me off my feet and turned me around. I have only stepped onto a softball field once since then and that was in 1993.

After the walk, which again wasn’t 10,000 steps, we went to our official “carb loader,” Mary’s Gourmet Diner, and ate. After a brief stop at the record store, we headed to our new official “caffeinator,” Twin City Hive and grabbed our coffee (or in my case, decaf) beverages before heading home. We didn’t get to head down to Hoots Roller Bar and Beer Company, but we’ll get back down there, soon!

At the end of the day, including our supplemental activities (a step is a step, is a step, is a step) we walked 8,367 steps, for a distance of 4.06 miles and burned 3125 calories. Those stats are courtesy of my walking sponsor, Omega Sports. You can get all your walking equipment needs at Omega Sports. They are the sports hook up for the everyday active types.  Thanks to them and all our sponsors and anyone that believes in what we’re doing.

Until next time, get to steppin’!!