Stephanie and I went downtown to get our day started. The July 4th weekend is always Heavy Rebel Weekender here in WSNC and that takes over Trade and Liberty Streets. So, in order for us to get to Mary’s Gourmet Diner and Atelier on Trade, thus starting our walking day, we had to park a good few blocks away. So, really, our walking day began before brunch. That doesn’t happen very often, but that’s okay with us.

We started on the corner of Fourth Street and Spruce Street. We walked north on Spruce until Sixth Street. We turned east on Sixth and made it to Trade Street. We made our way through the classic cars and Heavy Rebel folks as we walked north on Trade. We made it to Mary’s and had our brunch. We finished and walked south on Trade to get to Atelier on Trade. We had our coffee, looked at the cars on that end of the hoopla and then walked south until Fifth Street where we turned west. We walked Fifth to Cherry and then south to Fourth and turned west. We stopped at the current The Less Desirables studios to grab 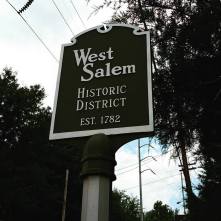 something out of it. We continued west on Fourth back to our car (we call him Nigel, yes we name our cars).

We decided on the West Salem neighborhood while eating at Mary’s. We parked at the Old Salem Visitor Center, slathered ourselves with suntan lotion and head out on our trek. We crossed Marshall Street and went southwest on Walnut Street. We crossed Poplar Street and Broad Street before we hit an incline and northwest until Walnut merged with Washington Avenue and Granville Drive, all becoming Granville.

We continued northwest to Franklin Street where we turned northeast. We came to Green Street which we crossed to get to the campus of Piedmont International University 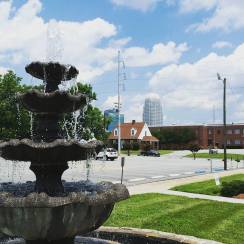 (formerly called Piedmont Bible College) and walked the sidewalk until the water fountain. We had to stop and take in the view of the WSNC skyline along with the fountain. We walked that to Broad and turned north/northwest until we got to Wachovia Street. We turned east/northeast on Wachovia until we crossed Marshall and to where it merged with Brookstown Avenue. Brookstown took us past some of our favorite restaurants, the Winston-Salem Visitor Center (once the Cotton Mill) and the historic Brookstown Inn.

We followed Brookstown until we reached The Strollway. We walked south along The Strollway until we came across the first bench that was available on this segment of the The Strollway. We’re not only doing walking but taking in what the city has to offer. It’s shaded and offers a glance into classic/historic homes behind us and Old Salem to the southeast. Funny enough, we saw a friend of ours, Chris Zona (an avid runner), run past us. That was pretty cool. We continued down The Strollway until we got back to the Old Salem Visitor Center.

We hadn’t hit our 10,000 step goal just yet, so we went up the wheelchair ramp (every step counts) to the Old Salem Heritage Bridge and crossed it. We walked north on South Main Street back to Walnut and took Walnut back across Old Salem Road and to our car. We were about 30 feet from our car when my Vivofit 3 (thank you Omega Sports) alerted me that I had hit my goal. We stood and raised our arms in the air and jumped like Rocky on the steps of the library and high fived and kissed before collapsing back into the car.

We then headed to have our post-walk celebratory adult beverage at Hoots Roller Bar and Beer Company.

It was fitting that we walked West Salem and along and into Old Salem since this is the July 4 Weekend. The very first July 4 celebration in the entire country happened in Old Salem, then called only “Salem,” in 1783. Other cities dispute that, but they’re wrong.

All in all, considering the entire days strolls we walked 11,319 steps. That equals 5.47 miles and I burned 3251 calories. A good day, indeed. It was hot, but West Salem offers a great bit of shade. The shade made for what felt like a 10 degree difference. No way to know for sure, but oh well. There’s a lot of cool older houses and buildings along this route and we will walk it again, in more detail once the video web series kicks in. I’ll keep you informed about when that is happening. I only have two to three more steps to get that rolling.

Thanks for reading and, as usual, get to steppin’!!