Stephanie and I were up early this day, knowing that there were other things we’d be doing in the day and that it was going to be very hot later that afternoon. So we had decided that our “10k by 10a” quest would be Buena Vista this day. Yes, we’ve been to that area a couple of times and we’ll continue to go there. There’s a large neighborhood back in those side streets and plenty that we haven’t explored.

We started our journey (with GoPro from Omega Sports strapped on) at Five-Points on North Stratford and we headed north. We observed some wonderfully rich architecture and I’m not just talking about the folk or houses that made up the neighborhood. I mean the

We walked Roslyn to Buena Vista Road where we turned northwest until we reached Dartmouth Road. Stephanie had attended Whitaker Elementary for a time and wanted to show me where it was. I say was because it had been torn down and a new one built on top of the old place. So there were stories about boys that picked on her to be told. We walked Dartmouth south to Forest Drive where we turned east. We walked Forest until we returned to Roslyn. We walked south all the way to Warwick Road, which we took east, crossing back over Stratford and to Runnymede Road where we turned southwest and back to Five Points. We needed to get a few more steps so we walked back up Stratford until Warwick and crossed the street to come back to Five Points, and crossed Country Club Road and onto S. Stratford and around the BB&T building’s parking lot to reach our car. Just as my watch chimed 10,000 steps it also showed that it was 10am on the dot.

We went downtown to Mary’s Gourmet Diner to have our after-walk nourishment from our official “Carb Loader” and then down to Atelier on Trade to our official “Caffeinator.” Afterwards, it was time for our “liquid reward” at Hoots Roller Bar & Beer Company.

But, our day wasn’t done. We then went to RayLen Vineyards to perform with the Vagabond Saints Society and then after that, we went back to downtown WSNC to perform

Many thanks to our sponsor Omega Sports without whom I’d be on old tattered shoes and bad socks, and have to resort to checking my phone instead of my Garmin Vivofit 3. They make the walks possible.

While N Stratford is a bit noisy (it’s a pretty busy street), the neighborhood streets to the west of it are very quiet, serene and beautiful. There are plenty of wonderful houses, buildings and structures to gaze upon as well as magnificently manicured lawns and landscapes to enjoy. It’s one of the more upscale neighborhoods in town and it shows. But, they seem very inviting to others who may be wandering about their community. We thank them for their welcome hospitality. Look for this to be a video soon (at least that’s my plan).

Where would you like to see or read of me exploring in this town? Do you want to walk with us? Hit me up here by leaving a comment, or on Facebook, Twitter, Instagram or send me an email. I’d love to hear from you. Until next time…

On Saturday, May 14, 2016, Stephanie and I decided to forego the Highland Games to get some long distance walking, instead. We’ve spent time in Buena Vista before, which you can read about here. We parked, again, at the BB&T at Five Points and started our march. This time, we picked the eastern side of the street and walked, as we did the last time, north to Reynolda Rd. However, we didn’t stop and turn around this time. Instead, we crossed the somewhat-treacherous Reynolda and onto the ritzy East Kent Road.

Immediately, the lack of any sidewalks gives off the vibe that interlopers such as ourselves may not be welcome to walk freely among the elite residences along the road. Now, I am not saying that the residents of this area are actually like that. I am only saying the vibe is as such. There are beautiful homes there, to be sure. We continued down into and then up from the valley that is home to the eight or so homes that call the short segment, well, home.

From that we walked to Arbor Road. Kent all the way to Arbor is a canopied stretch of trees and shade. On Arbor it’s like you’re emerging out of the shadows (you are) and immediately into the friendly, warm arms of Helios, himself. Then, you realize that there are no trees and Helios’ cordiality is more like a friend that starts to grate on your nerves that you just don’t want to talk to for a while. However, we were out on a beautiful and mild day so while the sun was beaming down, it wasn’t harsh and was, truly, enveloping. We stopped along the way and sat on a bench that was out in the open, on the sidewalk, and chatted a bit. Our legs were screaming for a break and we acquiesced. We then continued northeast on Arbor which at Pilgrim Ct. turns into 25th Street. We continued until we came to 24th and decided that we should turn back. At this point, we were already over the 7500 step mark. Instead of going back down Kent when we arrived, we continued southwest on Arbor back 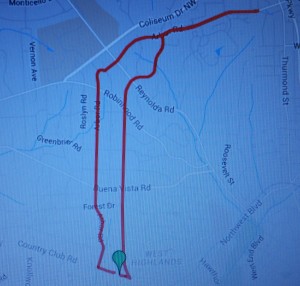 to and across Reynolda.

Across Reynolda, Arbor makes a southern turn heading due south. We walked this same stretch of road in our last trip to Buena Vista. We thought about making a detour around to one of the other streets in the neighborhood, but the reality of it was, we were already a few hours in and we hadn’t had any water or bathroom breaks. Walking downtown gives a few places that we can stop into along the way to fix that problem, but you can’t just stop and ask a resident if we can use their restrooms or if they can spot us a glass of water. Perhaps 30-40 years ago, but not today. So, because we knew that Arbor ran all the way back to Country Club Rd., and therefore directly back to a spoke of Five Points where we parked the car.

So, let’s sum up that walk. From Country Club Road and North Stratford Road to East Kent Road to Arbor Road to 25th Street back to Arbor all the way back to Country Club is 4.8 miles. Combined with other walking, such as walking around Walmart to get a few items and the car dealership lot while getting my car inspected, combined with incidental walking and the fact that we were out after midnight from the night before; all-in-all I walked a total of 14910 steps and 7.37 miles. I also burned 1092 calories. That’s my second best step total since I started tracking my progress using my phone.

It was worth celebrating and we did so by having lots of water and a frothy beer from Hoots Roller Bar & Beer Company. It was a very productive and active day. We’ll be back with another walking adventure, soon. I’m also working on a few news items about the blog and the ideas I have for it. Thank you for reading!!

Yesterday was a good and long walk day. It was the Buena Vista (North Stratford Road) neighborhood today. Stephanie and I parked at the BB&T at Five-Points and headed north on Stratford. We walked all the way up to Reynolda Rd, which was 1.2 miles, itself.

From there we went back down Stratford back to Robinhood Rd and two streets west to Arbor Rd. We took Arbor south to Warwick Rd. Then west on Warwick to Roslyn Rd. North on Roslyn to Reynolds Dr. West on Reynolds where we stopped and had lemonade from two cute kids selling them for about $.25 per ounce. We purchased $.75 worth. We continued on Reynolds until we got to South Westview Dr. South on Westview to Country Club then east on Country Club all the way back to the BB&T.

That whole stretch was 4.3 miles. The beauty of that neighborhood is that there is so much to walk that we can return over and over and see a whole different side of it each time.

groceries for dinner. Then to Walmart off of Peters Creek Parkway for more groceries and more walking.